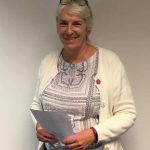 Linda has over 20 years’ experience in the field of Dementia, healthy ageing, neuropsychiatric epidemiology and ethics. She is part of the Cambridgeshire brain bank committee www.cuh.nhs.uk/tissue-bank/cambridge-brain-bank and supports the on-going CFAS brain donation programme in all CFAS study centres in the UK. Coordinates the Cognitive Function and Ageing Studies (CFAS) www.cfas.ac.uk, including:

MRC CFAS: 1989 – Present:  Interviewed over 18,000 people aged over 65 years, in their own homes in Cambridge, Oxford, Newcastle, Nottingham, Liverpool and Gwynedd. Data has been collected over a period of more than 25 years, in which over 48,000 interviews with participants have been conducted. The study also includes a unique collection of over 590 donated brains.

CFAS II: 2008 – Present:  Interviewed over 7,700 people aged 65 and over in Cambridge, Newcastle and Nottingham using the same recruitment strategy and same geographic areas as MRC CFAS. We have conducted baseline and two year follow up interviews with participants

CFAS II Wales: – 2011 – 2016, recruited in two centres in Wales – Gwynedd and Neath/Port Talbot, who recruited over 3300 people over the age of 65 years.  Core findings were incidence and prevalence rates of dementia in Wales, bilingualism, importance of social networks, resilience and cognitive reserve.

The CFAS studies have examined prevalence and incidence of cognitive decline and dementia in England and Wales over two decades. It has looked at the natural history of dementia and cognitive decline, potential risk factors for dementia and the associated levels of disability and frailty found in an ageing population.  CFAS has published over 250 research papers on topics such as epidemiology policy, frailty, disability, genetics and molecular neuropathology.