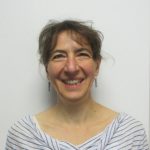 After finishing her (diploma/masters) degree in Computer Science at the University of Dortmund, Germany, Britt was working as a Bioinformatician at the German Resource Centre for Genome Research (RZPD) in Berlin. Here she mostly looked at internal biological data where she would map it to public database ids whilst also integrating it with different querying systems, one of them being Integr8 at the European Bioinformatics Institute. She then moved to Cambridge and worked at the Sanger Institute within the Zebrafish Genome Analysis team, creating databases with genome and manual annotation data for the Zebrafish research community. Later she joined the Analytical Genomics of Complex Traits group as the Data and Informatics manager and provided both operational and computational support to the group. She was also responsible for the phenotype data of the different projects, which entailed handling data from both isolated population and whole population studies like UK BioBank or the UK Household Longitudinal Study.

In 2018 she joined the CRMH (Cambridge Research Methods Hub) at the University of Cambridge as Data Manger where she supports different research projects. She is also one of the University FOB holders for the CPRD (Clinical Practice Research Datalink). In this position she advises researchers on data available in CPRD, conducts feasibility studies and extracts data for use in various projects at the DPHPC and the wider University.