Mothers who experienced gestational diabetes during pregnancy face a high risk of developing type 2 diabetes later, but diabetes prevention programmes do not fit well with their lives as mothers of young children, according to a new review of published studies by Becky Dennison with colleagues in the Prevention Group.

Diabetes during pregnancy (gestational diabetes) affects around 4% of pregnancies in the UK and is the single most important risk factor for the development of type 2 diabetes. The lifestyle interventions that are offered to women after pregnancy to prevent type 2 diabetes were developed for the general population and are generally geared to older people without young children in tow.

This research set out to explore studies of women’s varied views on reducing their risk of developing diabetes after pregnancy, including women participating in interventions. It forms part of the Prevention’s Group’s wider programme of research into the determinants of diabetes and the impact of health behaviours and prevention strategies. A sister review of studies of the views and experiences of women with a history of gestational diabetes on postpartum glucose testing is in progress.

The 21 studies that the team reviewed mostly report findings from interviews and focus groups about women’s experiences, views, perspectives and beliefs. The findings show that women’s diets and levels of activity are influenced by a drive to prioritise their family above themselves and by access to resources, time, energy, information and support.

We all know that eating a healthy diet and being physically active can be difficult. From mothers’ perspectives, we have explained some of the specific barriers that are faced after gestational diabetes alongside some of the things that could be helpful”

The researchers carried out a qualitative synthesis of the results, labelling themes and grouping the findings to gain the best possible understanding of the varied lived experiences of the women in the studies.

Six areas of influence on women’s diet and exercise after gestational diabetes were identified: women’s role as mother; support from family and friends; the demands of life; women’s personal preferences and experiences; their diabetes risk perception and the information they have; and finances and resources. 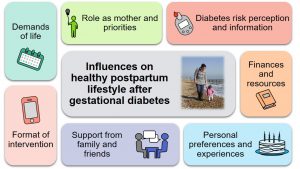 Most of these influences were found to have both positive and negative effects. For example, women tended to put their responsibilities as mothers before looking after themselves. But some felt too busy and occupied with childcare to exercise or eat healthily,

“I was exhausted and already feeling so guilty for being away from my child while I was working so I did not exercise” – mother.

Others said they needed to make changes so they could be well enough to look after their families and model healthy diet and exercise to their children.

The researchers used the findings to draw up a checklist of recommendations for researchers and clinicians interested in encouraging changed health behaviours, such as:

These findings highlight the importance of considering the specific needs and experiences of mothers when designing strategies to promote healthier lifestyles after gestational diabetes. We are now using the recommendations from this synthesis to develop effective interventions for this easily-identifiable, high-risk population.”

This research was funded by the NIHR School for Primary Care Research.

Learn more about the Prevention Group