Small increases in public support for policies to address problems such as obesity, gun crime and climate change could be achieved by providing evidence about what works, according to the first systematic review of studies exploring the impact of communicating policy effectiveness on public support, published today in Royal Society Open Science.

Concerted national and international efforts are needed to tackle complex threats to population and planetary health. Public support is often critical for policymakers, raising the question of what predicts public support. Perceived effectiveness of a policy has consistently been found to be one of the strongest predictors of support for policies across a range of areas.

Evidence to date is mixed on whether support is increased by communicating evidence of policy effectiveness.

The researchers undertook a systematic review of research on this topic to address these mixed results; analysing 35 studies of experiments that looked at participants’ views after exposure to evidence about what works, compared with those who were not exposed to evidence.  They also analysed 10 studies that tested public support after communicating the ineffectiveness of a policy.

The research team explain that no such studies are available yet on what happens in the real world, where there are multiple messages competing for public attention on many different issues. But results from this study show that opponents of any given policy may be successful in reducing public support for it by communicating evidence that it won’t work.

This review provides the most robust evidence to date on what happens to public support when you communicate evidence that a policy is effective or not effective. The changes we find might seem small but presidential elections and referenda outcomes have hung on less”

– Professor Theresa Marteau, co-author and Director of the Behaviour and Health Research Unit 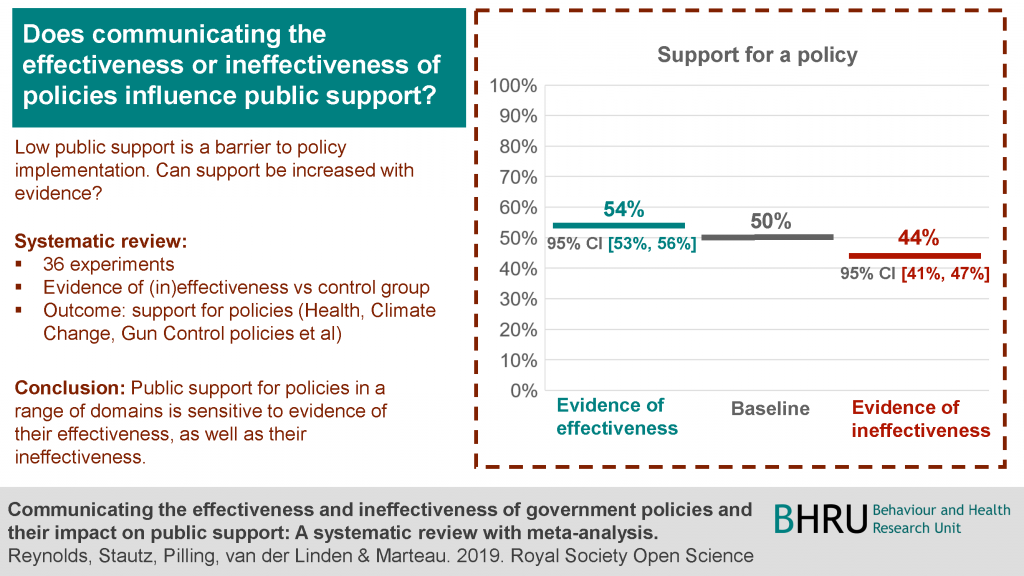 The study was funded by the National Institute for Health Research (NIHR).