Since the publication of the Black Report, through numerous subsequent policy documents and much policy activity the health differences between the rich and poor in Britain remain a reality which blights the lives of millions. Inequalities in health bring earlier death and longer periods of debilitating illness to those in poorer circumstances compared to those in better circumstances.  There are marked difference in life expectancy for a child born today depending on where she or he happens to live.  So we know and have known for decades that there is a problem.  Why have the undoubted efforts to do something about it failed so spectacularly?

A great opportunity was missed in 2008. That year the WHO Commission on the Social Determinants of Health reported.   This had assembled global evidence about the patterning of health inequalities and efforts to tackle or reduce them. Delegates at the launch conference in London listened to speeches from dignitaries from around the world including the UK Prime Minister and no less than four Secretaries of State.  What no one could have been left in any doubt about was the sincerity of the speakers as they wrung their collective hands bemoaning the global state of affairs and talked in general terms about the social determinants of health.

However, in speech after speech it became obvious that the assembled dignitaries, or the civil servants who briefed them, had not the slightest idea about what to do about it.  They talked about the importance of individual behaviour change, of getting people one by one to be more active, to eat fewer calories, drink less alcohol and give up smoking – all individually based behaviour change strategies.  They had no vocabulary to capture the dynamic nature of the phenomenon they felt so passionately about

In the years that have passed government policy in the UK as well as WHO pronouncements have continued on much the same flight path.  In England post 2010 there was even a move away from telling people explicitly to change their behaviour on the grounds that this was what the “nanny state” would do, (and by definition nanny states are bad things).  Instead the English were the beneficiaries of the “responsibility deal” in which business and industry were encouraged to behave more responsibly in the marketing of their products –  products which were potentially or actually harmful to consumers.  For a while “Nudge” theory gained some traction in policy as a means of enabling people to make the healthier choices, but even that seems to have disappeared from the rhetoric.

Any dispassionate review has to conclude that the medicine isn’t working and that we continue to have wide differences relating to wealth in patterns of health and disease across the population.  So what‘s gone wrong? And what could we do differently to really make a difference?

Policy has been focussed on the wrong question, fixated on individual level behaviour change and has been blind to a number of other lines of attack on the problem even though many policy documents make rhetorical reference to the social determinants

Policy has been focussed on the wrong question, fixated on individual level behaviour change and has been blind to a number of other lines of attack on the problem even though many policy documents make rhetorical reference to the social determinants.

Health inequalities are not new.  There have always been differences but our forebears in England knew this and as long ago as 1601 established a universal system of poor relief to combat the inevitable fluctuations in the agricultural cycle which brought in its wake hunger, famine and disease and death.   The Elizabethan Poor Law was a universal system which protected the most vulnerable and was the bedrock of economic growth which led eventually to the industrial revolution.  The Victorians subsequently abandoned this universal system replacing it with the austerity-based workhouse and the means test which drove many people into poverty and hastened their demise.   Universal benefits are the safety net for a prosperous, humane and healthy society.  Our current policies are some way distant from this.

There is another important historical dimension.  There are parts of the UK which were, when the Victorians started collecting data about patterns of health in the mid-nineteenth century, the healthiest and unhealthiest places to live.  More than a century and a half later Surrey is still a very healthy place to grow up in and central Manchester and the East End of London among the unhealthiest, just as it was in the middle of the nineteenth century.  Many localities bear the scars of industries long ago closed down but which left indelible unhealthy footprints – tobacco in Nottingham, Bristol and Glasgow, asbestos in the East end of London and Glasgow, for example.  The patterning of health inequities we see today are best thought of not as cross sections in the present but the aggregation of the social relations and health histories of hundreds of different localities and their social and industrial pasts.  What can be learned from these histories about the dynamics of causes and what can we do to prevent similar health disasters into the future? What will be the long term footprints of the availability of alcohol on a 24 hour a day basis and of the array of fast food outlets, especially in poorer districts of our country?

When we are born we don’t start with a clean sheet.  We have a biological inheritance which is strongly mediated by our social inheritance

We must also be mindful of biology.  Recent developments in epigenetics show that there is a clear pathway from environmental conditions to direct effects on the growing fetus in utero which is potentially transferred generation to generation.  When we are born we don’t start with a clean sheet.  We have a biological inheritance which is strongly mediated by our social inheritance.  Throughout our lives these biological processes manifest themselves in the occurrence of cardio vascular disease, diabetes, kidney disease – some of the major causes of the patterning of the health inequalities.  The conventional way of trying to deal with these diseases has been to advocate behaviour change so that people live healthier lives. But this is utterly unhelpful because the conditions in which people live are a product not simplistically of individual behaviour but of the supra-individual social practices in which their lives are enmeshed.

The social practices of everyday life are the vehicles which carry the processes of power, oppression, discrimination, and social exclusion. The competitive relations for scarce resources of all kinds, including access to health, between social classes, genders, ethnic groups and the socially excluded more broadly, produce and drive of both individual and population patterns of health and disease.  These patterns are an emergent property of the continuing dynamic struggles going on in social systems.  If we only ever think of health as a characteristic of individuals, not as a consequence of the dynamics of societal relations, our chances of success in even ameliorating the worst consequences of inequality are forlorn indeed.  And of course nowhere in policy over the last six decades have we seen any conception of this dynamism informing what passes as health policy.

This dynamic approach connects with the idea that health is not so much an absence of pathology but rather a capability – it allows us to do the things we value and is the basis of engagement in civil, political and economic life.  Without it life can be very difficult indeed.  Capabilities are not individual; they are relational.  We realise our capabilities in relations with others.  If we are in chronically disempowered positions vis-a-vis others our capabilities are severely constrained and limited.  If on the other hand we are in relations with others that help us to realise our capabilities – our potentials – this is an environment in which we are likely to thrive.

What is called the health gradient is the representation of patterns of health and disease across different sections of society.  In western societies it shows a gradual change in the health of the population depending on social status whether measured by occupation, income or education.   The more well to do enjoy better health than the disadvantaged (schematically represented in figure 1).  But even though the steepness of the gradient varies in different Western societies, in all of them it is characterised by being a relatively smooth incline. 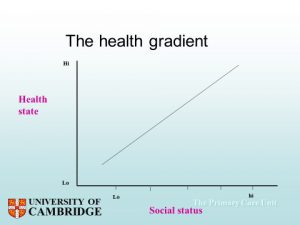 Some economists have recently noted that the patterns of the spread of wealth in western societies are fundamentally changing.  The wealthy are getting disproportionately richer while the wages of working people have been static for decades.  If this description is right, then it means that the gentle progressive gradient might in future fracture with a far larger proportion of the population in relatively poor health and a small and disconnected well to do group enjoying good health (figure 2). 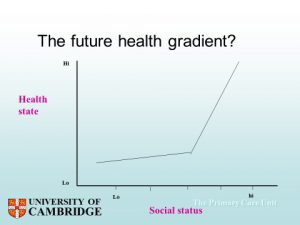 Health inequities in the UK were at their shallowest in the 1950s when the UK was one of the most, if not the most equal society in terms of wealth distribution in the Western world.  Some Sociologists were very worried about the so called embourgeoisement of the working class. The UK can no longer lay claim to that label and we can stop worrying about embourgeoisement.  Britain is now one of the most unequal societies. Yet in health terms this has been in part hidden because decade on decade the absolute health of the population has continued to improve while at the same time relative health inequalities have got worse.  Are we about to see a change?  If the predictions of some economists about the fracturing of the class system are right, how long before the health gradient fractures? If it does and the pattern of health inequities in the UK comes to resemble that of a developing economy, not an advanced modern society, what a price to pay for austerity and the failure to think in dynamic terms about health inequalities?

‘Health, welfare, and the state—the dangers of forgetting history‘ by Simon Szreter, Ann Louise Kinmonth, Natasha M Kriznik and Michael P Kelly was published in The Lancet on 3rd December 2016

Michael P Kelly is senior visiting fellow here at the Primary Care Unit, Department of Public Health and Primary Care, University of Cambridge.  He was previously the Director of the Centre of Public Health Excellence at NICE where he led on the development of public health guidance. He is a public health practitioner, researcher and academic. Natasha Kriznik (@NMKriznik) is a sociologist and qualitative researcher based in the Cambridge Centre for Health Services Research. She has a broad interest in medical sociology, particularly in relation to health inequalities and public health, as well as the processes related to the production of social policy. Ann Louise Kinmonth is Fellow and Director of Clinical Studies at St John’s College, University of Cambridge. Ann Louise’s research interests include the prevention and management of diabetes and heart disease. Tom Ling is a senior research leader at RAND Europe. He leads evaluations and applied research focused on the key challenges facing organisations in health, well-being, and development.

This article was first published at Cost of Living website on May 31, 2017