Amid ongoing welfare cuts, Ann Louise Kinmonth, Mike Kelly, Natasha Kriznik  and Simon Szreter argue that investment in health and social care have been integral to British economic success since 1600.

There needs to be an end to this idea of setting economic growth in opposition to the goal of welfare provision. The suggestion of history is that they seem to feed each other.

Cutting welfare and social care budgets during times of economic hardship is an “historically obsolete” strategy that ignores the very roots of British prosperity, the group, from St John’s College, have warned.

Writing in the The Lancet, the team argue that squeezing health and welfare spending in order to reduce taxes, and on the basis that these are luxuries that can only be afforded when times are good, overlooks a critical lesson of British history – namely that they are central to the nation’s economic success.

The authors are all part of a group based at St John’s College, University of Cambridge, which is studying the causes of health inequalities and looking at how research in this area can be used to inform policy interventions.

Drawing on recent research, they argue that the concept of a British welfare state, widely thought to have begun after the Second World War, actually dates back to a “precocious welfare system” forged during the reign of Elizabeth I, which was fundamental to England’s emergence as “the most dynamic economy in the world”.

While the Chancellor of the Exchequer has said that there will be no further welfare savings during the present Parliament beyond those already announced, the paper is directly critical of the continuation of those existing policies, which have reduced welfare spending overall in the name of economic austerity.

Referring to the statement made by the former Prime Minister, David Cameron, that “you can only have a strong NHS if you have a strong economy”, the authors argue: “The narrow view that spending on the National Health Service and social care is largely a burden on the economy is blind to the large national return to prosperity that comes from all citizens benefiting from a true sense of social security.”

They continue: “There are signs that Theresa May subscribes to the same historically obsolete view. Despite her inaugural statement as Prime Minister, her Chancellor’s autumn statement signals continuing austerity with further cuts inflicted on the poor and their children, the vulnerable, and infirm older people.”

By contrast, the paper argues that a universalist approach of progressively-funded health and welfare spending is an integral part of economic growth, and something that modern states cannot afford to do without. That conclusion is echoed in a new educational film, developed from work by Simon Szreter, Professor of History & Public Policy at Cambridge and a co-author of the Lancet piece. 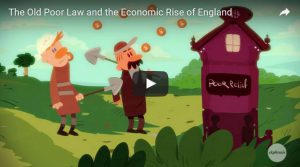 “We are arguing from history that there needs to be an end to this idea of setting economic growth in opposition to the goal of welfare provision,” Professor Szreter said. “A healthy society needs both, and the suggestion of history is that they seem to feed each other.”

Perhaps surprisingly, the paper traces that feedback loop to the Tudor era, and specifically the Elizabethan Poor Laws in 1598 and 1601. These enshrined in law an absolute “right of relief” for every subject of the Crown, funding the policy with a community tax and applying both through the local Parish.

The authors say that this not only represented the world’s first social security system, but also made the elderly less reliant on their children for support, increased labour mobility, enabled urban growth and eased Britain’s transition to an industrial economy. The system also maintained a level of demand by supporting the purchasing power of the poor when food prices rose.

Rather than stifling Britain’s economy, the paper argues that the system was therefore essential to helping the country to become the most urbanized society in the world, and the world’s leading economy, between 1600 and 1800. Although the population more than doubled during this time, key indicators of prosperity – such as life expectancy – actually improved.

“Overall, it facilitated the most sustained period of rising economic prosperity in the nation’s history,” the authors observe.

The authors go on to link the economic growth that the nation experienced under the welfare state after 1945 with similar universalist principles of progressively-funded health and welfare provision, arguing that these stimulated a dynamic period of per capita economic growth, and cut the rich-poor divide to an all-time low during the 1970s.

Conversely, they argue that the economy has stagnated when such principles have been abandoned. The Poor Law Amendment Act of 1834 overhauled the earlier Elizabethan Laws in an effort to prevent abuses of the system that were felt to be draining the pockets of honest taxpayers. Infamously, this involved providing relief through workhouses in which the appalling conditions, seared into social consciousness by authors like Charles Dickens, were so bad that only the truly destitute sought their help.

The study suggests that there is no evidence that this approach, which came close to criminalising the poor, actually brought about much economic benefit. In fact, British growth rates gradually fell behind the country’s rivals’ after 1870 – and only recovered after 1950, in the postwar decades of the revived, universalist welfare state.

The authors also point out that to cut welfare budgets because this will relieve taxation on “hard-working families” implies that those who need welfare are somehow unproductive. Just as the Victorian 1834 measures attempted to address a perceived problem with the “idle poor”, current strategies often dub benefits claimants, directly or indirectly, as “scroungers”.

“The interests of the poor and the wealthy are not mutually opposed in a zero-sum game,” the authors conclude. “Investment in policies that develop human and social capital will underpin economic opportunities and security for the whole population.”

The paper, Health and welfare as a burden on the state? The dangers of forgetting history is published in The Lancet.