Simon Griffin, Professor of General Practice at the Primary Care Unit and the MRC Epidemiology Unit, was awarded an honorary doctorate from Umeå University in Sweden, in recognition of his support for the Swedish National Research School in General Practice.

The National Research School in General Practice is a ground breaking initiative funded by the Swedish Research Council that aims to improve the quality and quantity of general practice research in Sweden by providing stimulating and rigorous education and mentorship from national and international experts.  As a member of the international faculty since 2010, Simon has provided advice on strategy to increase the critical mass of primary care researchers in Sweden, and has made a substantial contribution to the education and mentorship of a new generation of researchers, including advising 10 PhD students per year on their research proposals. Over 70 PhD Students have benefitted from the programme to date.

Simon also collaborates with Umeå University on analysis of data from the Västerbotten Intervention Programme (VIP). VIP was developed to address the high levels of cardiovascular disease in northern Sweden in the 1980s and combines population-based health promotion strategies with invitations for middle-aged inhabitants to attend systematic cardiovascular risk factor screening in primary care every 10 years. The programme has collected data on over 120,000 assessments.

In recognition of this work, Umeå University’s Dean Diana Berggren, at the Faculty of Medicine, invited Simon to receive an honorary doctorate from the University in October 2016. 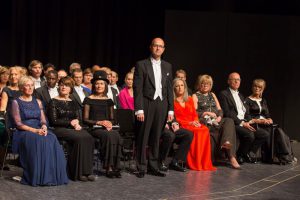