Congratulations to the Addition team!!

The ADDITION paper “Screening for type 2 diabetes and population mortality over 10 years (ADDITION-Cambridge): a cluster-randomised controlled trial” was voted the BMJ Awards Research Paper of the Year. 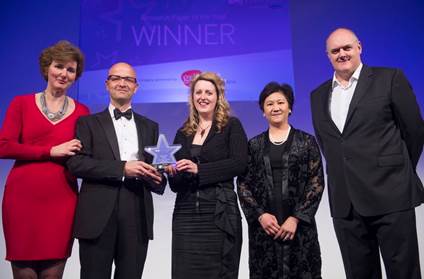 Simon Griffin and Rebecca Simmons picking up the award on behalf of the Addition team.

Richard Lehman, from the University of Oxford who does the weekly blog in the BMJ summarising papers in the big five journals, was one of the judges. He said about the paper: ‘Here is one of the most important papers to have come out of UK general practice for some years. It reports a cluster randomised trial with 9.6 years of follow-up which shows that screening for diabetes in high risk individuals has no benefit. It used a validated risk score to identify 15,000 individuals at risk who were offered screening, with a control group of 4,137 who were not. Individuals identified with diabetes were then randomized to usual care or intensive multifactorial treatment. I know that at least one of the investigators was expecting the trial to demonstrate benefit, but there was simply no reduction in all-cause, cardiovascular, or diabetes-related mortality within 10 years. And this trial not only shows a lack of benefit from the early detection of diabetes, but also casts grave doubt on the doctrine of a “legacy effect” from early tight control, as claimed by the UKPDS investigators.’

For the full publication in the Lancet, click here

Simon Griffin and Rebecca Simmons picking up the award on behalf of the Addition team.